Women’s Federation for World Peace in Moscow has three main directions of activities: intercultural projects, moral and family education and charity projects for people in need.

This ensemble «Angels of Peace» was created with the purpose to educate children as loving and caring people who can serve the society. That’s why the main focus has been to take part in charity and socially significant projects.

During 8 years of existence the Ensemble took part in many peace-making projects and projects promoting moral and family values like: 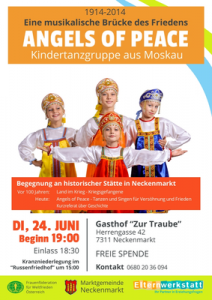 In 2012 the ensemble took part in an International Talent Festival in South Korea and received a golden prize. At that time, the children were also invited to a famous Little Angels School and had a beautiful Bridge of Peace ceremony between two ensembles.

In June 2014 Angels of Peace held a Peace tour in 5 cities of Austria. 2014 was a special year for Russia and Austria because 100 years ago World War I started.
Angels of peace gave performances in 5 cities: in Graz, Neckenmarkt, Linz, Vienna and in Wals, Siezenheim, near Salzburg. Official greetings were given by the Salzburg Russian General Consul Sergei Smirnov.

If we go on some trip parents usually pay for the children’s tickets and buy costumes. We usually take one manager, 2 teachers and some parents who can help to take care of children during the trip.

Most children in the ensemble come from large families.